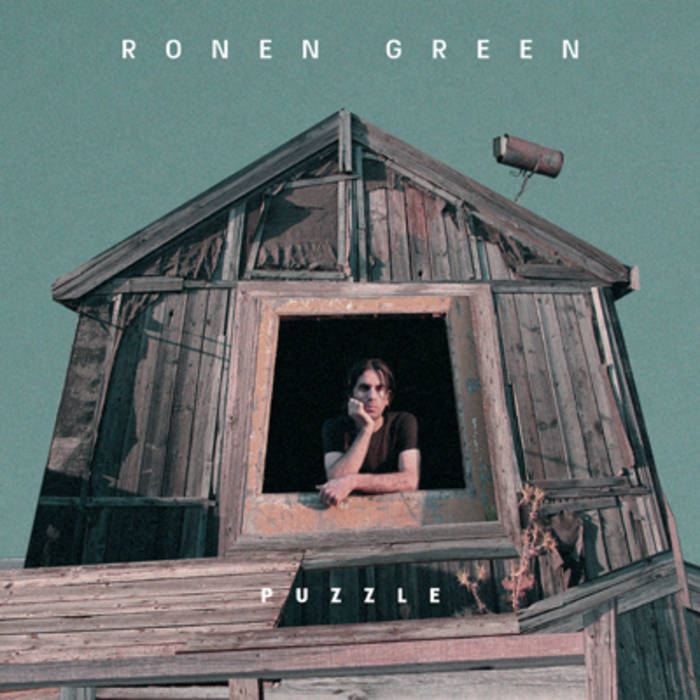 Original, smooth, warm and refreshing Indie-Folk songs. With some interesting and unique touches of African and Middle Eastern sounds

Shahar Kachka Baharel - percussions and Ngoni (on tracks 1, 9 and 11)

Songs were recorded and edited in Tel Aviv, at Mitzlol Studios by Kobi Farhi and Yonatan Barak. All additional recordings and editing at Eisenwoman-Biyalik Studio by Tamar and Ronen.

Ronen Green is an independent musician whose music merges blues and folk, reflecting his South African roots alongside his Middle Eastern origins growing up in the multi-cultural surroundings of Israel, bringing out a range of influences from Bob Dylan to Ali Farka.
A singer-songwriter working slightly off the beaten path, steadfastly optimistic in his acute observation of the life around him ... more

Track Name: Talk About God
The bells are being rung by the wind
The dust is rising up to cover the seeds
Then the rain comes down to wash it all
And new life can spring

The sun is going down, sky is getting pink
The moon is getting full and it looks like a ring
Then the next morning when the sun comes up
It feels like a dream

The bells are being rung by the wind
The sun is going down, sky is getting pink
The stars are filling the sky
Same for you and I
Track Name: One Of These Days
Ride around town
Chasing our tail
Looking for a dime
and maybe we'll be someone

One of these days its gonna happen to us
Peace will arrive and we will all be as one
I know that's a fat cliche, its a well known fact
We do what we do and we just gotta do it right

I love her so
She only knows
I love her so
and she knows that I do
She knows how much I do
Yes I really really do
Track Name: Roof Top Blues
There's a man who sits there
Up on the roof top
He sits there waiting for his name to drop
He says- you can name a road after me
You can even name a rock
But don’t ever never refer to me like the man from the roof top

There's a man who sits there
Up on the roof top
He looks down at everybody like we are just a little drop
He will get very worried soon
Because many drops can make up a river
I just hope the water, I say, rises right up to the roof top

There's a man who sits there
Up on the roof top
He rarely comes down and if he does it's only with guards
He doesn't really know the people
No, only the ones who work on the roof top

There's a man who sits there
And he makes up wars and rules
He will tell you who your enemy is
If you just turn on the news
There's much to look out for
When you look only up to the roof top
Track Name: On The Sand
You sit next to me, wet on the sand
I can feel the breeze that’s making you sad
You’ve been threw so much
And you're still a little girl who doesn't understand
How could everything have turned out so bad
You’ve seen the dark clouds of life
Come over too young
And now you sit once a month and cry with the band
Next to me on the sand

You sit next to me wet on the sand
And I can feel you shaking
But it ain't cold outside baby
I thought that it was the weed maybe
And you who just want to be free
Cant you see
That we're gonna be
The most glorious thing
We are as wide as the sea baby I don’t always say the right things
But not every bird sings
Next to me on the sand
Track Name: Propaganda
It's all over TV
It's every where you look
It's there when you open your eyes
It's written in a book

Propaganda coming our way
Propaganda filling my brain
This time I'm gonna skip that train
Track Name: Puzzle
Life is like a puzzle you got to connect each piece together
Then you'll see what comes out

First you build a frame, then you fill it up
Then you look again

Life is like a puzzle every piece has its place
You just got to make the connection
If you get stuck, all you need is just a little luck

Life is like a puzzle you can make a mistake
But it all works out
Piece by piece, step by step
But you got to have patience
Track Name: Pain &Fear
I carried on my shoulders a gun for three years
A systematic way to teach me all the fears
They said don’t trust yourself because we know what's right
And so what, so what if a friend of yours dies tonight

You are cheap for your money but still you let them play
With the lives of your children and just accept what they say
While they justify war and crime and defense
Does is have anything to do with the coming elections in the U.S.
Oh yes

So we put our heads down and say- oh now what can we do
And if we don’t wake up soon my friends, I fear we'll never do
I know there's something better
Then just pain and fear
Track Name: Say Goodbye
Say goodbye You're about to change your life
Is gonna jump right off the edge
Because you're not no one, no you're not a number in their book
Those are just papers and they don’t tell me nothing 'bout you
You're not just a believer and not a figure of speech

You're name was forgotten way back at school
When they taught you how to run, kill, shoot and rule
Face the facts, don’t even try to figure
No its nothing but a lie that’s turning your wheel

Bandcamp Daily  your guide to the world of Bandcamp

Tasty gems from around the world, plus interviews with Kaitlyn Aurelia Smith and Nick Hakim.